Tanning bed dangers are exposed to an incredible 30 million North Americans every year in tanning salons, and somewhat unbelievably, the numbers are increasing.

As an alternative to being outdoors, or in conjunction with it, the potential dangers presented by this option are most often unknown by those doing the tanning.

Some tanning bed users believe that their chances at avoiding skin cancer and/or skin damage are decreased by using a tanning bed instead of lying out in the actual sun. However, when used incorrectly, the damage can actually be far greater than spending many long hours soaking in the sun's ultraviolet rays.

Tanning beds are often used for cosmetic purposes, especially among adolescents and young adults. In addition to this, many people are aware about the potential health benefits of exposure to the sun's UV rays due to the Vitamin D we create. However, the crucial aspect of indulging in these benefits is managing the risks that can be associated with overexposure.

Tanning beds emit ultraviolet rays, or UV rays. UVA and UVB are both dangerous rays that affect the deep and top layers of the skin, respectively. When the skin is exposed to these UV rays, melanocyte cells produce melanin, a brown pigment that darkens the skin. This is how the skin attempts to protect itself from further damage.

Excessive exposure can lead to problems such as skin and eye cancer, and tanning beds are considered unsafe by organizations such as the U.S. Food and Drug Administration, the World Health Organization and the American Academy of Dermatology.

Some eye conditions that can develop from the use of tanning beds are treatable, such as photokeratitis and photoconjunctivitis, inflammation of the cornea and conjunctiva. However, chronic eye problems can also develop.

The intense rays emitted in tanning beds are strong enough to cause severe eye injury to the retina, cornea, and can cause:

Special eye goggles must be worn during each tanning session. These are shaped so as to protect the eye and the eyelid only and not give you that goggle shaped tan you get sometimes when tanning outdoors with your sunglasses on.

Although the desired effect is a wonderfully healthy sun-kissed skin, frequent indoor tanning regularly results in wrinkled and sagging skin, which of course signal premature aging.

Tans and especially sunburns cause photoaging, a term that refers to premature aging of the skin due to exposure to UV radiation. The skin develops a texture similar to leather and forms wrinkles, and sagging skin and sun spots also appear.

It is the UVA rays, rather than the UVB rays, which affect the deeper layers of skin, and are therefore mostly responsible for this negative effect.

Going to the tanning salon frequently can result in photosensitivity, which means that the skin will not be able to stand being in direct sunlight without a negative skin reaction.

Photosensitivity disorders can also occur as a result of certain medications being taken increasing the sensitivity to light. In some people, specific medications can produce adverse effects when the person is exposed to sunlight or other types of ultraviolet (UV) light of an intensity, or for a length of time, that would not usually give the person problems. Some of the common medications listed include...

These reactions are not common but are worth taking note of if you are taking any medicines. 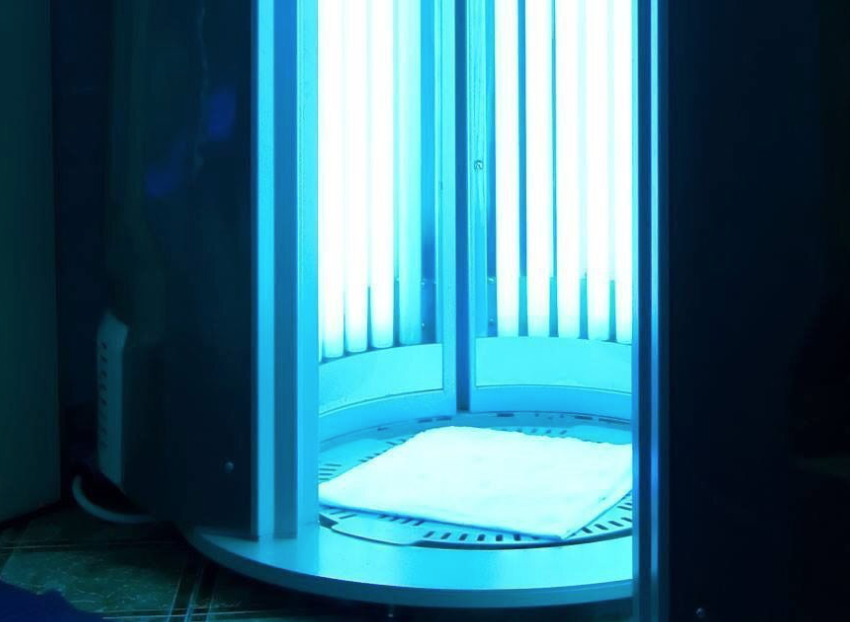 Disease.
The spread of diseases such as staph infections and some sexually transmitted diseases can result from tanning beds that are not sufficiently cleaned and disinfected between different users.

Excessive exposure to UV rays can produce a weakened immune system, making the body vulnerable to disease and illnesses.

Ultraviolet light damages the skin by causing chemical bonds to form in the wrong places along the DNA molecules in our cells. Normally, other, even smaller molecules called photolyases heal the damage. Sunburn and UV overexposure creates the situation where the DNA is too damaged to repair, and cells die.

Because tanning bed dangers are not quickly visible, such as cancers, eye problems or photoaging, people continue using the beds every day.

Because tanning beds can be used at the same intensity every day, in contrast to the sun’s variable daily intensity, the UV rays from tanning beds become far more dangerous than natural sun exposure.

In the United States, the UV output of suntan beds is regulated by the Food and Drug Administration so that users, particularly those who get their artificial tan from tanning bed salons, get only a limited amount of UV rays per session.

The government, though, has refused to uphold some medical associations' call for a ban on the use and sale of sunbeds. Instead, authorities prohibited the sunbed industry from selling the products for any purpose other than cosmetic. This rule effectively prevents consumers from filing health claims should any of the suspected tanning bed dangers manifest.

Being outdoors in the sunshine too long causes sunburn is widely acknowledged, but somehow lying in a tanning bed for a long period of time is not seen as he same. Unfortunately, many people believe that the longer they stay in the tanning bed every day, the more quickly they will tan, thus avoiding the need to go back again. This couldn't be more wrong.

Individuals that plan on using a tanning bed should not only limit the amount of time spent in the tanning bed, but also the number of times they go tanning at the salon every week.